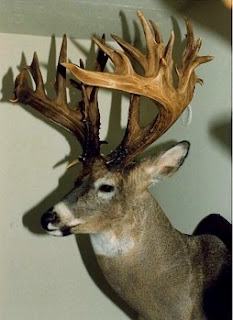 Saskatchewan has always been on the map when it comes to some of the largest whitetails ever harvested world wide.  The popularity of hunting this ungulate is largely driven because whitetails are the widest spread species of the deer family, living throughout much of Canada, United States, Mexico, Central America, South America and even being introduced into some European country's as well.
The buck featured at the top of the page is the Elburn Kohler Buck.  Harvested in 1957 and registered in the town of White Fox Saskatchewan.  This beast of a whitetail holds the number one spot for non velvet non typical whitetails ever harvested in the province measuring out at a whopping 257 3/8". 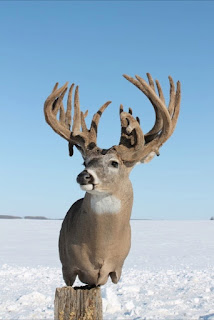 This next buck is the largest Non Typical/ velvet whitetail ever harvested in Saskatchewan.  Harvested by Dallas Heinrichs from Loydminister in 2012 and scoring an incredible 271 0/8.

You can't have a list of Saskatchewan's top whitetails without including the World's number one ranked Typical Whitetail.  Milo Hanson Harvested this giant scoring 213 5/8 on November 23, 1993. It can be said this is likely the most infamous whitetail ever harvested in Saskatchewan and was taken in the Bigger, Saskatchewan region. 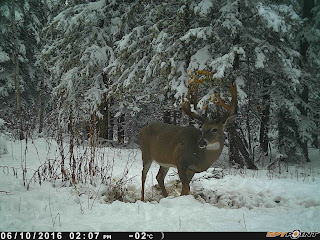 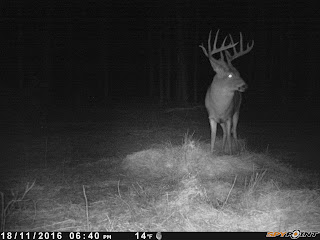 Province wide the genetics are there.  Both Whitetails featured above we're photographed in the White Fox, Saskatchewan area, and both would not have an issue making the Boone and Crocket record book.  If your looking for a trophy hunt with huge Potential then look no farther than Bone Quest Outfitters and we'll give you the guarantee to do everything in our power to stack the odds in your favour.
www.bonequestoutfitters.com

Popular posts from this blog 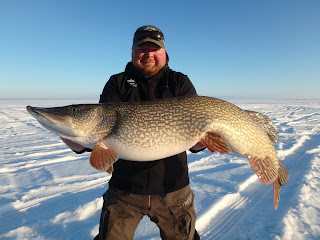 Like most people I was once a quick strike user.  In the past three ice fishing seasons I have not tied on a single treble hook.  Not because they don't work but rather because the circle hook single handedly saves fish, and hook up rates when used properly are equal or even slightly higher. The key is bait/ hook size.  Since there is just a single hook in the middle of the bait, you need a bait rigid enough to sit horizontal.   Smelts, ciscoes, herrings and even some alwives are perfect for this technique.  The baits we run are anywhere from 5-10" in length.  Small baits when targeting giant pike but like any fish big pike are opportunistic and will eat these bite sized meals.  Hook size can be experimented with but what we have found is 5/0 owner hooks perform exceptionally well. Pictured above is another 30lbs pike with a 5/0 circle hook in the corner of the mouth.  We have found that roughly 8 out of every 10 pike caught on a circle hook are hooked coffin corner.
Read more 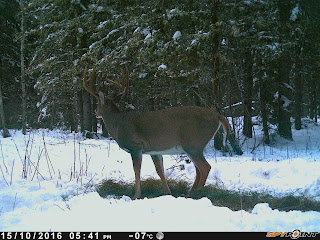 So you have decided to venture north on the hunt for a trophy Canadian whitetail.  Being prepared and having the right gear to keep you comfortable in the woods when sitting sun up to sun down is very important.  Here is what we recommend our hunters bring to ensure they are comfortable and therefore ready when the opportunity at a trophy Saskatchewan whitetail presents itself. -Warm footwear, Saskatchewan Pac Boot from cabalas or an equivalent boot for warmth -Heater body suits -Warm mitts that can be slipped off quietly for shooting -Balaclava -orange stocking cap -Shooting stick -Binoculars -Day Pack capable of carrying all your gear to and from the blind everyday -Orange vest -Orange Hat -2 boxes of ammunition -Firearm declaration form for at the border http://www.rcmp-grc.gc.ca/cfp-pcaf/form-formulaire/pdfs/5589-eng.pdf -Passport www.bonequestoutfitters.com
Read more